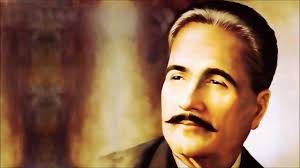 Poet-philosopher Allama Mohanmad Iqbal is the best articulated Muslim response to modernity that the Islamic world has produced in the 20th century. His was a creative engagement with the conceptual paradigm of modernism at a sophisticated philosophical level through his prose writings, mainly his several lectures contained in the book titled “The Reconstruction of Religious Thought in Islam”, that portrays his basic philosophic insights. His Urdu and Persian poetry is the best embodiment of poetically mediated thought, squarely in the traditional continuity of Islamic literature and perhaps the finest flowering of wisdom poetry that was a contemplative or inspirational poetry in the modern times that projects him as a political activist and a socio-political reformer who rose ardently up to his social responsibility, his calling to the Muslims at a critical phase of the Indian history.
Born in Sialkot on November 9, 1877 – April 21, 1938, Iqbal studied in Cambridge in Britain and Munich and Heidelberg in Germany and became a jurist. But he concentrated primarily on scholarly works on politics, economics, history, philosophy and religion. He is best known for his poetic works, including Asrar-i-Khudi,, for which he was knighted, Ruuz-i-Bekhudi, and Baang-i-Dara with the enduring patriotic song Tarana-i-Hind (Sare Jahan se Achha, Hindustan Hamara). For Irnians, who adored his Persian poetry, he was Eghbāl-e-LāIqbal (Iqbal of Lahore. Iqbal was a strong proponent of the political and spiritual revival of Islamic civilization across the world, but specifically in South Asia. A prominent leaders of the All India Muslim League, Iqbal encouraged the creation of a “state in northwestern India for Muslims” in his presidential address in the AIML meeting at Allahabad in 1930. Iqbal encouraged and worked closely with Muhammad Ali Jinnah, and he is known as Muffakir-e-Pakistan (“The Thinker of Pakistan”), Shair-e-Mashriq (“The Poet of the East”), and Hakeem-ul-Ummat (The sage of Muslim Ummah). He is officially recognized as the national poet of Pakistan. Iqbal died on November 21, 1938 and lies in eternal rest in a mausoleum along the Mughal period Badshahi Masjid in Lahore.